This Is the Most Profitable Home Improvement 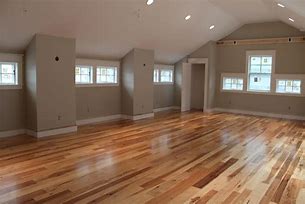 The most profitable improvement homeowners can make to boost their resale value isn’t as sexy as a kitchen with marble counters and stainless-steel appliances, as practical as a dedicated home office, or as fun as a backyard pool or hot tub.

Instead, the work that pays off the most is refinishing or replacing the home’s hardwood floors, according to a recent remodeling impact report from the National Association of Realtors®. Homeowners recouped about 147% of their investment for refinished floors and 118% of what they spent on new flooring when they sold their homes.

“It looks beautiful in photos and more people are relying on technology to search for homes these days,” says Jessica Lautz, NAR’s vice president of research. “Wood flooring really feels more hygienic than having a carpet in your home. … And pet lovers and owners want hardwood floors for the ease to clean.”

The remodeling report was based on several surveys conducted by NAR, the National Association of Remodeling Industry, and HouseLogic.com between August and February. The surveys combined received about 6,200 responses. (To estimate costs, NARI members envisioned an average-sized home of 2,495 square feet built after 1981. The materials used were considered midrange.)

As the COVID-19 pandemic set in, Americans spent roughly $420 billion remodeling their homes in 2020, according to the report. While most of those projects would have happened regardless of the pandemic confining people to their homes, many homeowners got more ambitious and did larger projects. Or once they got started on renovations, those home improvement plans grew to encompass other parts of the home.

Folks remodeled to upgrade surfaces, finishes, and materials in their homes and to add features that could improve livability. The majority were happy with how the work came out, and more than half wouldn’t change a thing.

“People did get bored of their living spaces during the pandemic,” says Lautz. “If you’re spending nearly 24/7 at home, enjoying that revamped home brings a lot of happiness.”

Homeowners typically broke even on unflashy projects like insulation upgrades, replacing the roof, and garage doors.

As many were spending more time indoors with their families during the pandemic, adding more square footage to homes was also popular. But homeowners typically spent more on this extra space than they recouped when they sold their residences.

The next most profitable projects were converting basements into additional living spaces, putting in new closets, and turning attics into more living space. While folks did lose a bit of money on them, they had some of the highest cost recovery.

Bathroom and kitchen upgrades and adding new bathrooms and primary bedroom suites were also high on the list of projects that recouped the most value.

However, adding the extra space didn’t always result in boosting the home’s value by as much as the work cost. Adding a new primary bedroom suite cost about $172,500, but resulted in homeowners receiving only an additional $100,000 in the resale value of their homes. A new kitchen cost about $80,000 but tacked on only about $60,000 in value.

“What’s important to remember is a lot of people did this just for their own enjoyment,” says Lautz. “It’s very personal in how you would remodel a kitchen in all of the finishes you choose.”

The money spent on home improvements made many homeowners report that they felt happier. Painting the outside of a home or an interior room as well as adding additional space to a home, fixing the floors, and renovating closets brought homeowners the most joy, according to the report. And some of those projects didn’t require professionals.

“In some areas of the country, there were even shortages of paint because so many people were refreshing their space,” says Lautz. “If you can DIY a project during the weekend, a lot of people found joy in that.”