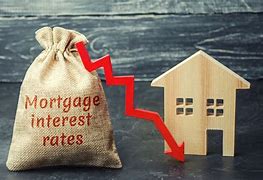 Mortgage rates saw their biggest one-week drop in years this week, and a big reason is the same thing that has caused rates to rise so dramatically this year: inflation.

But while the last couple of weeks have seen a drop in rates away from 6%, the future just holds more uncertainty and potential turbulence because of broad economic factors, experts say.

“I really think this comes down to inflation,” says Robert Heck, vice president of mortgage for Morty, an online mortgage broker. That’s because inflation determines what’s next for the Federal Reserve’s rate hikes, and the mortgage markets are pricing in those expected Fed changes.

The average 30-year fixed mortgage rate this week fell 30 basis points to 5.55%, according to a survey by Bankrate, which like NextAdvisor is owned by Red Ventures. Rates have come down significantly since they nearly hit 6% in June.

In a similar survey by the government-sponsored entity Freddie Mac, the average 30-year fixed rate dropped even more, falling 40 basis points to 5.3%. It’s the biggest one-week drop since 2008. That’s the lowest since early June, erasing the big jump in the middle of last month.

The surge in mid-June was caused by an unexpectedly bad inflation report – the Consumer Price Index put the year-over-year rate at 8.6% in May, the highest in four decades. That led to a 55-point jump in mortgage rates just ahead of the Federal Reserve’s announcement that it would raise its benchmark short-term rate by 75 basis points to address inflation.

Since then, other data have pointed to better inflation figures, prompting lenders to cut rates in anticipation that the situation might be starting to turn around, Heck says. “If inflation data is favorable or if it shows signs of cooling off, we should see rates continue at the levels they are or drop a bit,” he says. “If (inflation figures) start going higher, there’s almost equal probability that we go back to levels we were seeing last month and potentially higher, depending on how bad the economic data is showing.”

Despite the drop, the mortgage market is facing a lot of volatility, with rates moving up and down quickly. That isn’t likely to change, Heck says. “I think there’s been a lot of talk toward an upcoming recession,” he says. “I think that is still very much up in the air and that’s why the market continues to be volatile.”